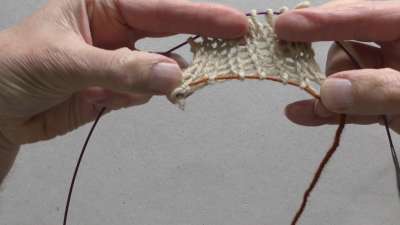 In this video I will show you how to cast on using the basic stranded cast-on.
It is unattractive and is seldom used for anything other than gauge swatches.

Hold the yarn in your left hand.
The tail end should be over your thumb, and the working yarn over your forefinger.
Run both yarns across your palm and hold them in place with your other fingers.

Now you need to make the first loop on the needle.
Hold the needle in your right hand pointing to your right.
Place it under the yarn between your left thumb and forefinger. Lift and turn the point over the working yarn.
Now you have a loop with the working yarn closest to the tip and holding the tail end in place.

Move the needle under the working yarn on your forefinger, lift it and move it back to the centre.
This makes a yarn-over.

And make a yarn-over:
under the working yarn and back to the centre.

Each of these pairs of movements makes two stitches.
You will have an odd number of stitches on your needle – the original loop plus pairs of cast-on stitches.
Stop when you have enough stitches – with one extra if you need an even number.

Turn the needle round and hold it in your left hand.
You are now ready to start the first row.

Using an odd number of stitches

Using an even number of stitches

If you need an even number of stitches, you have an extra stitch on your needle.
Carefully take the last yarn-over off the needle.
The tail end is lying loosely around the working yarn.
Hold it against the needle with the fingers of your left hand.
This will give you a firm loop to knit.

Now you can start to knit.

In this video I have shown you the basic stranded cast-on.
I hope you have found this video useful, and that you will be able to use this cast-on for your gauge swatches.

You can see a pictorial tutorial for the basic stranded cast-on in the T-Reference section of this website.