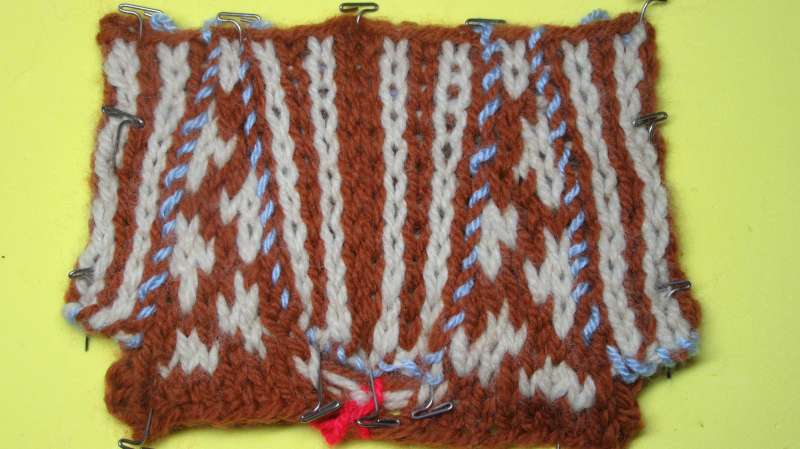 Steeks allow you to knit in the round even when the finished item may not be continuous (for example a cardigan, or any garment with armholes). This t-torial suggests one way of casting-on the extra stitches for a steek that takes account of how the steek will be reinforced.

Show notes for the video t-torial

In this t-torial I’ll be showing you how I cast on for a steek. The steek that I’m going to make is to cover these four stitches here, that I’ve marked with a pin, that will be put on waste yarn, and might later be used to pick up an armhole, for example. I’m going to use an eight stitch steek. I’m using an even number of stitches, so that should I have to change the colour yarn in the middle of the steek, I can be sure of catching both colours of the old yarn, and both colours of the new yarn. I’m also going to be adding an edge stitch to each side of the steek in the background colour, which would normally be used for picking up armholes for the arms or button bands.

This is how I do it. I’m going to be knitting up in pattern, so keeping this pattern with 2, 4, 4, 4, 4, 2 colours. Two dark stitches before the 4 stitches I want to pick up, so here are the four stitches I’m going to take onto this yarn. You can see that I’ve already threaded it through, Here’s the stitch before the [first steek] one, and what I want to do is to make an edge stitch, tied into this one. So, knit that stitch as normal but leave the loop on the needle so I can knit into the back of that. That’s the edge stitch. I want to mark that position, because that’s actually the start of the steek. That stitch is always going to be in knit in the background colour.

Now, before I do anything with those other stitches, I’m going to make the stitches for the steek.

Loop in one colour, knit in the next [other colour]. [There are now] three steek stitches.

I want to make another edge stitch.

Now I return back to the main fabric. Here are the four stitches that I’m going to put on hold, and here’s the first stitch of the fabric that’s going to be knit as a light coloured stitch.

However, I want to create a new edge stitch, so I’m going to knit into that with the dark yarn, put in a placeholder [stitch marker] for the start of the steek, and then I’m going to knit through the back of the loop [in the light yarn] to give me the light stitch that I want. And continue to the end of the row.

Why use an even number of steek stitches?

I’ve got the two edge stitches that were knit into to the last stitch the fabric [before the start of the steek], that ties them in quite closely to that, and then I’ve got the alternating steek stitches. As you can see each stitch is formed from a loop of the opposite colour. This means that when I come to reinforce the steek I can make sure that very bottom of the cast on edge and the stitches themselves are reinforced so they don’t pull back.

The reason I used the eight stitch steek is so that when I reinforce I’ll be tying those two stitches together and those two stitches together so if I change colour in the middle, the two old colours are going to be held together and the two new colours are going to be held together, so that the whole fabric is reinforced even if I’m changing colour.

So that’s how I cast on for my steeks.

I hope you found this useful.

This site uses Akismet to reduce spam. Learn how your comment data is processed.