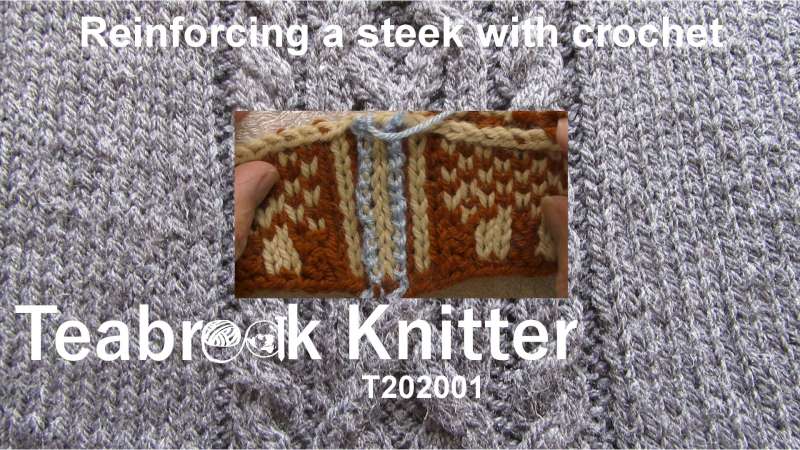 Steeks are used when knitting in the round to allow arm holes, cardigan openings and other cuts to be made in the fabric. This T-torial explains how to use the crochet technique to reinforce steeks, so that the loose ends at the cut do not pull loose.

Show notes for the T-torial: Reinforcing a steek with crochet (T202001)

Steek with an even number of stitches

I’ll start off by talking about reinforcing a steek with an even number of stitches.

I use steeks like this particularly when I’ll be changing colours in the middle of the steek, so where the steek is it is at the beginning of a round. By using a steek with an even number of stitches I can make sure that I catch both the old and the new colour yarns at the steek so they don’t become unravelled.

Structure of a steek with an even number of stitches

Here’s how I reinforce an even number of stitches in a steek.

Here is the swatch that I am going to be using for my steek. As you can see, in the centre here I have two rows (two columns!) with the same colour, and that is the convention I have used to mark the centre of my steek. The steek is eight stitches wide. Here are the extra edge stitches that will be used to pick up a button band or any other knitting that needs picking up.

You’ll see here that I have started off the swatch in corrugated rib [cartridge rib], but the steek itself is in stocking stitch, even in that section. This not only makes it easier to see the steek and to reinforce it, but also means that after the steek is cut that fabric will lay flatter than it would do if it had a texture itself.

The purpose of the steek is to hold the yarns in place near the cut, so that any stresses and strains will not cause it to unravel. Using traditional Shetland wool or other “sticky” wools, that steek will soon felt itself after use, and some would argue that it’s not necessary to reinforce steeks. But I always do.

As you can see here, the steek has two colours going across it in the knitting, so there are going to be two cut ends that we have to secure. If you have [a steek with] an even number of stitches you want to tie, on the right hand side here, this left hand leg to the right hand leg of the column of the adjacent colour. That will firmly attach those two stitches to each other, and those [yarn] ends to each other. Similarly, on the other side [of the line to be cut], you join the left-hand edge of the central stitch to the right-hand edge of the stitch next to it.

Reinforce with crochet a steek with an even number of stitches

I’m going to show you the crochet technique.

The first thing I want to do is create a slip knot so that the crochet chain can be started. So I wrap the yarn round my thumb, put it onto my finger, and put that working yarn through the loop and pull it tight. So, I have now got a loop there.

It’s easier to work so that you working across your item [rather than up-and-down], and I’ll be working from right to left because I’m right-handed; if you are left-handed you might prefer to work in the other direction.

The first thing I want to do is to make sure I catch the cast-on [or bind-off, if I working from left to right] edges. So I can put the hook through both those stitches, wrap the yarn round it, and bring it through. You will notice that I’m using a thinner yarn than the yarn I used to knit the swatch. This avoids adding bulk to the steek. Having pulled it through you can make a loop. That’s the cast-on edge caught.

I’ll see if I can give you a closer look at that. You can see there that the yarn is trapped.

We now go on to the next stitch. I have changed the yarn to the other hand because I have now got an established loop. So I go under the far leg of the stitch that is closest to me, and through and up under the stitch that is further away from me. Under that first leg of the stitch, pull it through, and then catch again, and pull it through again to make sure everything is bound tightly.

Keep going like that all the way up the steek.

Repeat for the other side of the steek

I start off again, making a slipknot, I’m putting it on the hook.

We work our way down again.

And here I am, down at the last stitch again.

Now I just need to trap the cast-on edge. It’s this loop and this loop. Making sure I also use the right thread. Pull that through, make sure that I have caught them. I can now cut that thread, and pull it through.

So, there’s my steek. It is now reinforced with a line of crochet either side of the centre. You can see the centre “stitch”, which is where it is going to be cut. That’s how I reinforce a steek with an even number of stitches.

If I’m using a steek with an odd number of stitches, its reinforcement is basically the same, but you do it in a slightly different place. Instead of having two stitches in the middle you only have one stitch along the middle. This gives you shorter ends, but it does mean that if you change colour there, it is more difficult to make sure that you’ve caught both the colours on each side of the steek.

This is how I reinforce a steek with an odd number of stitches.

Structure of a steek with an odd number of stitches

I have here a swatch that has got a steek with an odd number of stitches.

Here the two edge stitch columns and I’ve got 1, 2, 3, 4, 5 steek stitches. Here is the central line of the steek, and the cut will be made along the centre of those stitches.

The swatch itself has got a few rows of corrugated rib followed by stocking stitch in colour work, but you’ll see that the steek stitches themselves are stockinette all the way up. This will help it lie flat, and also makes it easier to identify the steek.

I start by making a slip knot where the bit you can pull and adjust it is going to be the working yarn. And put that on the crochet hook.

We now start working our way up.

We have now caught that with a chain of crochet stitches. In practice, I’d probably use a thinner yarn than this.

Repeat for the other side of the steek

Another piece of yarn. Another slipknot. Put it on the crochet hook.

This time I have turned [the fabric so that I am] working from right to left.

So now I want to catch that. I catch both those stitches and I catch that piece of yarn as well. It doesn’t matter if you catch too much. And you pull that tight. And pull that through the loop. Another loop, catch the yarn again and pull it through that loop, and we are now ready to start.

And work your way down the column of stitches …

So, now we have reinforced that steek. We have the two lines of crochet, one down each side, and in the middle here you can see where we are going to cut.

That’s reinforcement of a steek with an odd number stitches.

That’s how I reinforce a steek with an odd number of stitches.

I hope you found this useful. Until the next time, Happy Knitting!

You can see a pictorial tutorial for the basic stranded cast-on in the T-reference section of this website.